Stand Up For Special Needs

Frameworks Films collaborated with a group of parents of children with special needs from Kerry to produce this video to highlight some of their concerns at recent cuts.

To see the full video see

'The Limerick Soviet' tells the story of a revolution on the streets of Limerick in April 1919 when the first soviet in Ireland was declared. It occurred as workers in the city refused to succumb to the imposition of martial law in Limerick, which had been declared following the death of a trade unionist and IRA member, at police hands. This hard-line approach by the British authorities backfired and resulted in the calling of a general strike and the effective control of the city by the workers.

‘The Limerick Soviet’ examines the events leading up to this dramatic event, details what happened during the strike and asks who were the eventual winners. This fascinating account of twelve days in April 1919 brings to light a forgotten episode in Irish history. The documentary was produced by Frameworks Films in collaboration with the Limerick Council of Trade Unions and was made with the support of the Sound and Vision Scheme. 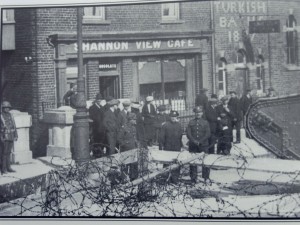 A barricade on Sarsfield Bridge

This four part series captures the richness of community life during a full year in the Ballinvreena Community Complex in rural south Co. Limerick, just over the Cork Border. Each of the four programmes in the series focuses on a different season and so the viewer experiences Winter, Spring, Summer and Autumn in Ballinvreena. The programmes feature interviews with members of the Ballinvreena committee and organisations, and the people in the community who avail of the various activities from amateur drama, to 45-card drives to a rambling house. It will also capture the experience of being involved in community activities with footage at the different events - capturing the actual experience of communities coming together - the fun, drama and enthusiasm. This series will highlight what one community can achieve with a dedicated group of local people who have a commitment to uphold the welcoming and friendly community spirit that has seen this isolated rural population thrive over the past 50 years. The series was produced by Frameworks Films in collaboration with Grey Heron Media and was made with the support of the Sound and Vision Scheme.

Davy's Cottage, part of the community complex in Ballinvreena