My Home – Housing Options for People with Disabilities:
A collaborative production with the Cork Centre for Independent Living, the film explores the concept of independent living with particular regard to housing.

Film-making workshops with The Rock Project,
Blarney St and facilitation of a production by the young people on the history of their project.

The GAMA Strike – A Victory for all Workers:
Produced in collaboration with the Socialist Party, this 60 minute documentary explores migrant worker exploitation in Ireland. The film tells the story of the fight against worker exploitation in the Turkish multinational construction firm GAMA, who were awarded large infrastructure contracts in Ireland. The film shows how the exploitation was first uncovered and how the Irish Government was forced to formally investigate the company after the matter was raised in the Irish parliament. The film documents the historic struggle, waged by GAMA workers, for justice. The film was premiered in Dublin in Aug 2006 and was also selected for screening in Cork Film Festival in Oct 2006. The film was since been screened at various other festivals worldwide. 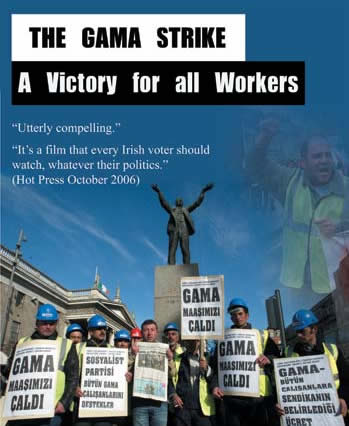 Composer in the Classroom:
Frameworks was commissioned by the Arts Office of Cork City and County Councils to produce a short piece on the Composer in the Classroom scheme where musicians John Spillane, Irene Buckley and Louise McCarthy worked with students from three schools to compose a selection of pieces for performance at the Cork International Choral Festival.