Work For All
Produced in collaboration with the Cope Foundation in Mallow, Co. Cork this film showcases the Supported Employment Scheme run by Cope Foundation, which aims to increase employment opportunities for people with intellectual disabilities in Cork city and county.

We All Have Feelings
Frameworks was commissioned by Cork County Council Arts Office to document the residency of visual artist Marie Brett in St Mary’s Primary School in Cobh.

IPS Workshops
Workshops in film production with participants on the Intensive Probation Services programme leading to the production of a short film. 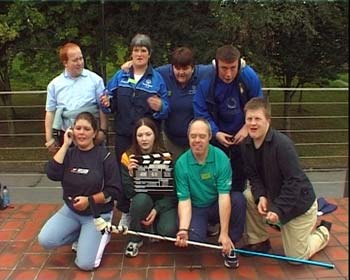 Choice of Life
Short videos with Cork Self Advocacy Group (It’s Our Life), the Caritas Training Centre (Our Figures) and Brook Day Care Centre (Equal People) for screening at the 5th National Service Users Conference of the Brothers of Charity ‘Choice of Life’

‘Through Whose Fault? – A Study of the Magdalen Laundries’
Produced with the Community Women’s Education Initiative following film-making workshops for participants on the ‘Women and Irish Society’ Module in the DEIS Dept of CIT

Southside Issues (Produced with the Mahon Anti-Racist & Equality Youth Group)
This short film explores the impact of discrimination on the basis of race. The young people devised the idea for the film and both acted and shot the film themselves. The film was later used as an educational tool with other youth groups.

What’s The Buzz – Produced in collaboration with the Gurranabraher Outreach Project and the FADA Project, this short documentary explores the issue of drugs by young people for young people. The film simply asks some of the basic questions about why, where and how young people take drugs. It has been widely used to stimulate discussion on drugs in a variety of educational settings.